Today is April 5th, 2017.  I wouldn’t (quite) call this a major breakthrough in my understanding of myself, but mostly that is because I don’t see how this can lead to anything.  But, I do have an idea.

I had a dream while I was sleeping last night in which I wrote something bemoaning the state of politics in the US.  In the dream, I specifically used this statement: “There are no liberals or conservatives in US government.  There are only those who are greedy or despots, and there are plenty of both in both parties.”

That needs some explanation, especially in this era of hyper-partisan politics.  What I mean is that there are those who went to Washington for the ability to enrich themselves financially, or there are those who think their idea of an ideal government is so great that it is okay to use the power of government (force) to compel those who disagree to submit.  As of this writing, I don’t see anyone in Washington who doesn’t fit into one or the other group.  There hasn’t been anyone in Washington, to the best of my knowledge, who didn’t belong in one of those groups FOR OVER 30 YEARS.

The longevity of this partisanship in Washington is infecting every facet of society.  Christians think it’s okay to use the 1st Amendment to compel atheists to attend SOME form of church.  The GLBT crowd think it’s alright to use the force of law to compel some form of “equal treatment” from those who do not want to associate with them.  Liberals think they are being “tolerant” when they write laws that compel submission from conservatives.  Conservatives think they are looking out for themselves and their families when they empower businesses and churches to exercise greater influence and control.

EVERYONE IN THE UNITED STATES needs to learn the meaning of TOLERANCE.  We can not build a more tolerant society by empowering an ever-growing, ever more powerful, government.

Oh, and just in case someone cares – I’m picking on the United States because it is my home, not because it is alone in experiencing this problem.  The whole world needs to wake up and realize the perils of hyper-partisanship.  And ALL Muslim mosques need to start speaking out AGAINST the use of force to compel change for non-Muslims. 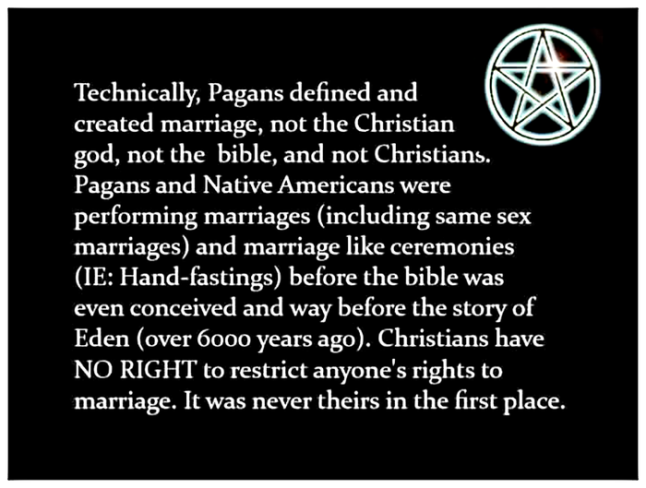 Serendipity – gotta love it! Someone else earlier today asked me a similar question (from a one-life-only point of view) and here was my answer to them:

I grew up in the United Methodist Church in Lebo, KS – back in the ’60’s and early 70’s. Then, in 1978, my parents divorced. Both were members of the same church, but this was one of the most bitter, ugly divorces you can imagine. Vicious!

My response to that can be summarized as “If this is how Christians express brotherly love, I’m going to look elsewhere. ”

Still, I didn’t give up on Christianity itself. I passed through many other denominations between 78 and 93. Catholic (never completed catechism), Baptist, Seventh Day Adventist, Nazarene, and a few more. At some point, there would always be a question I would ask that they either couldn’t or wouldn’t answer. When that would happen, the pastor would quietly advise me that it would be better for me to seek the answer somewhere else.

In 1992 I was working at a convenience store (graveyard shifts) in Enid, OK. One night when I was off, I was up watching late-night television, and saw a half-hour infomercial for a type of mental health approach I’d never heard of before. It seemed pretty straight-forward. I called an 1-800 number for more information, but ultimately couldn’t get the book because I didn’t have a credit card. Then, 2 weeks later, I found a copy of the book for sale at a yard sale across the street from where I lived. I bought it.

The book was Dianetics: The Modern Science of Mental Health. You may have heard of it – it was the book that ultimately led to the creation of the Church of Scientology. I won’t go through the long process of how it happened, but because I was using that book on my own, I eventually ended up in St. Louis as a staff member delivering Dianetics to the church’s parishioners.

I worked at the church from 12/1994 to 6/2004. During that time, I completed the church’s in-house Minister’s Course and was ordained (8/1995). All of the courses are self-paced study, and I’ve only ever seen one student who was faster on course than I was – and he eventually became the Executive Director of that church.

Still, I’m a person who likes rules and structure. When rules exist, are written, and work, I believe they should be followed. Let’s just say that rules were not consistently applied during the time I was on staff in St. Louis. After some efforts at trying to get them more uniformly applied, I became convinced that the problems were systemic not just to that church, but the whole global network.

After much reflection, I’ve decided that my biggest problem with organized religion is – it never encourages “sheep” to grow up to be something more – let’s call it “shepherds”. There is always someone up in the pulpit, and the sheep leave their brains at the door and expect him to tell them what to believe and how they should act. It never crosses their mind to think that someday they should be able to clearly explain their motives to others.

Another big problem with organized religion is that most (even Jews and Muslims) put their leaders in the position of being supported financially by the gifts of their sheep. This gives the shepherds a financial motive to protect his flock against “poaching” by the shepherds of other flocks – us vs. them. The “other flocks” become evil bad guys who must be resisted and their ways are demonized. No energy is expended on understanding or tolerance, because the pastor would loose part of his standard of living if any of his flock were to choose to cross over to the other group.

But, as I see it, tolerance and understanding (especially between different religions) is the only way we can effectively deal a permanent blow to international/interfaith warfare, suicide bombings, and genocide. Until it becomes accepted, even fashionable, to allow others to practice the faith they choose without any compulsion to exclaim “You’re WRONG” – mankind as a whole will be forever brother-against-brother. National divisions and race divisions are just the same thing wearing a different suit. As Michael Douglas said in the movie “An American President” – something like this: America is about defending to the death the right of someone else to say something I would expend every ounce of my life’s energy fighting against.

Well, I would take it a step farther. America is about helping others to do as they choose, even if their choices are not the ones I would have made or preferred they would make.

What do I think of this world of ours? To be honest, I think things are progressing just as they should. 26,000 years ago, we had a matriarchal society that had as a primary shortcoming the fact that it failed to generate any sense of gender equality. 10,000 years ago, we over-corrected into a patriarchal society, and repressed or forgot all of the good that existed in the former one. Our time on this planet has been a very long-extended school, to teach us how to rejoin with primary source energy. Those few who have made it and remain are here only for the purpose of helping show the way to others, so that eventually all mankind will complete that cycle of learning.

Do I wish for the days gone by, like those in Avalon? Sometimes I find myself feeling very nostalgic for those days. Life was much simpler then, in many good ways. However, most of the time, I prefer today – for I would not have continued to grow to become who I am now were it not for the time that has passed in the interim.

Do I feel that we will return in the year 2012? We don’t need to – we’re here now. If we each do what we can to promote harmony, understanding, cooperation, and good stewardship of our home (mother Gaea) as far and wide as our circle of influence will allow, we can help to make the transition of 2012 as smooth and joyful as possible for the entire human race. And yes, I do believe that humanity is on a count-down to a transitional event of monumental proportions in 2012. Whether it concludes that year, or only begins now and continues beyond then, remains to be seen. Our ability to accept responsibility for the outcome without being unnecessarily attached to any specific outcome will do much to facilitate that change.

Please, stay in touch. Over the next 4 years I will have as much need for counsel as anyone else. This will be a time of chaos and uncertainty for all, to one degree or other.